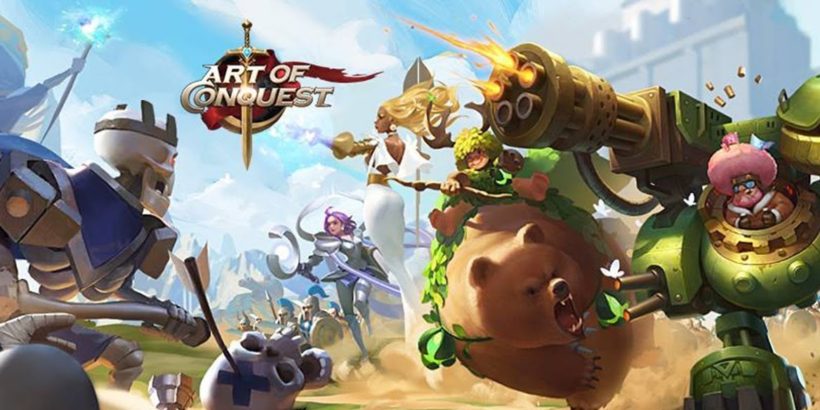 Art of Conquest is a fantasy & strategy game for Android and iOS devices, courtesy of Lilith Games. As a player, you are expected to expand your mythical empire by battling and building across NORE – A beautiful, handcrafted world, but full of magic, dwarves & monsters. In this article, we show you how to install this mobile game on your Windows 7/8/8.1/10/XP or MAC OS, but first, let’s take a look at its features;

When you launch the game, you’ll face a major decision, choosing one out of the three heroes- Avalon, Avril, and Rufio. Each of these heroes has his or her own unique abilities. Once you pick your hero, you’ll be able to use him/her immediately. The other two may be available at a later time in the game if you’re lucky enough to encounter them.

Avalon, the “Last Hope of Silverwing” has special abilities that support the archers he leads, the most important one being a “Natural Leader.”This ability allows you to place additional units on the battlefield and increase the Supply Cap (essentially troop capacity) for Gold, Silver and Bronze units. His “Focus Fire” is always useful against Bosses and the “Capture Resources” ability lets you gain additional resources after a battle.

Avril the “Ice Mage” is a mage with both DPS and control abilities. Her abilities require large amounts of Mana- a resource that’s spent over time. Her “Ice Wall” ability can divide a battlefield, and enemies won’t cross it while “Blizzard” can freeze enemy troops.

Rufio the “Golden Stallion” is the tank of the lot, dealing over 3X the damage when fully leveled up. He can use “Heroic Leap” to attack catapult across the battlefield, causing trouble for enemy troops. The use of “Heroic Troop” in conjunction with “Chopping Blade” deals with devastating AOE (Area of Effect).

You’ll be using your ability points to upgrade the default ability, supportability, control ability, and DPS (Damage Per Second) ability. Ensure that you distribute your ability points between all your heroes’ abilities wisely. You shouldn’t spend all of them on active ability since it will not be used as frequently as the other abilities.

Wood, MANA, and Gold can be found at any time on the map, and they may also be generated in your castle. They are mainly used to upgrade buildings and technology. Crystal, Mithril, and Blood Diamonds are rare resources and can’t be produced in your castle. But you can find them on the map. These resources can also be plundered or earned by opening chests. Your resources are likely to be plundered when you move out of the capital. So you’ll need to level up your warehouse, which increases the number of resources that are protected.

4. Upgrade Your Buildings and Units

Use the resources you’ve collected to upgrade buildings. We recommend that you focus on one type of technology. Improve Long-range tech to give a boost to Dwarven riflemen and tanks. Units like human archers and Lich images can be good choices too. Note that when you change races, your building levels won’t be affected, but the progress on unit technology will be lost.

5. Many Units with Varying Strengths and Weaknesses

If you want to succeed in this game, we recommend that you install Art of Conquest for PC on your desktop or laptop so as to enjoy the game on a large, clear, and better screen.

How to Download and Play Art of Conquest on PC:

About Art of Conquest

If you liked this post, don’t forget to rate and share. Also if you can’t run Art of Conquest on PC or any other issue, write in the comments below and we’ll help you.