Injustice 2 is a sequel to the already popular mobile action game- in “Injustice: God Among Us”. It was released on 16th May 2017 for Xbox One, PS4, iOS and Android devices. This comic book fighting game lets you build, power up and control a team of 3 of your favorite superheroes & villains of the DC Comics roster.

You are expected to get your heroes & villains into the arena and strive to make them the ultimate DC heroes or villains in blockbuster 3-on-3 actions. In this page, we discuss Injustice 2 cheats and tips that you need to know in order to become a pro in the battle field, as well how to get gems and credits.

1. Build an Ultimate Team By Upgrading Characters Based on Their Effectiveness

• Some people like to play offensively, with a high damage output, while others prefer constructing a strong defense first and then deal with opponents over time. Injustice 2 features tons of resources, and you can be sure that the team you would like to create will always be within your reach.

• You can use XP Capsules to upgrade the abilities of your characters so that they can dish out more damage in every battle. Also, you can increase their star ratings using “Hero Shards.”

• We recommend that you focus on upgrading the first 4-heroes first- Batman, Wonder Woman, Harley Quinn, and maybe Catwoman. You can then upgrade the more rare heroes as you obtain them.

Note: When you unlock Blademaster Robin & Arkham Knight Batman, consider them to be an important part of your team.

2. You Should Know the Special Character Classes

Each hero always has a special class associated with them, namely Magic, Agility, Tech, Meta & Might.

• Meta heroes are strong against Tech heroes, but weak against Agility heroes, while Magic heroes have no strengths or weakness against any character classes.

• And finally, Tech heroes are strong against Might heroes, but weak against Meta heroes. You should always set up your 3-character team before any battle by taking note of who you are about to battle.

Note: During battles, if you see a green arrow appear near your current hero’s name, you should know that they have the class advantage. Don’t hesitate to switch them out immediately when your opponent also gains the same advantage.

3. Be Smart in Battles

• During battles, a 3-hit tapping combo followed up by a crouching attack is one of the most basic combos that will help you out.

• Expect great results when you follow up basic combos with special moves that land only when you are close to your rivals.

• Always mix up your attacks and act faster when your current character is low on health by tagging in another character and pulling off the super attack as soon as it becomes available.

Note: From time to time, you’ll see a red bolt over your opponents head. This is a notification that it’s time to dodge because they are ready to land a strong attack.

4. Battle in the Arena

• When you participate in arena matches and win, you’ll earn exclusive rewards which are available only in that mode. Your team will face other teams put together by real players from around the world.

• How you use energy to keep playing in the arena is a bit different from the way it’s used in the campaign. The arena energy focuses on one character’s energy meter rather than a team’s energy. If you have over 3 heroes and one of them ends up depleted, you can always switch them out and keep fighting. 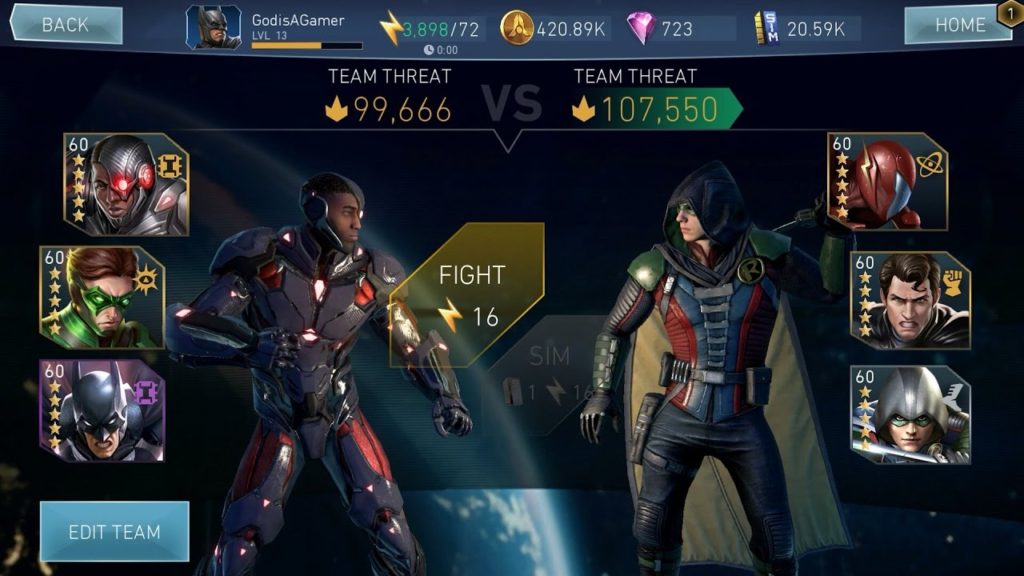 • Send your heroes on Operations all over the globe for real world amounts of time so as to quickly level them up and even earn more rewards faster.

• Ensure that you level up your “Operation Upgrades” using “Power Gems.”

• The character that’s assigned an operation will always have a much easier time to complete it when the “Completion Speeds” gets better.

• We recommend that you increase the “Threat” level of your characters so that they can get better “Operations.”

• If you want to develop your favorite characters- heroes & villains and earn exclusive rewards, you need to complete your daily objectives every day.

• Don’t forget to take on Challenges and knock out Achievements too.

If you liked this guide, don’t forget to rate and share. Also if you have other Injustice 2 cheats, tricks, tips or strategies, share them in the comments below.