Kingdom Rush Origins takes you through an epic adventure where you have to destroy evil monsters such as evil sorcerers, serpents and go after The Gnoll Tribesmen using an army of elves.

Most of its features are similar to the previous release by Ironhide games, Kingdom Rush. However, Origins take you way back to an era before the previous download happened. In Kingdom Rush origins better unique features such as spells, new upgrades, skills and new units have been added.

You must prepare your defenses against the twilight army to ensure that they don’t break through your wall when they launch attacks. The game features a magical realm having over twenty levels that you have to clear with each having an increasing level of difficulty.

You can choose to engage in any of the three difficulty levels and also choose to play in either Classic mode, Iron mode or Heroic mode. You will have to go against over twenty monsters and engage in war with other bosses each testing your level of skills and game masterly.

Infantry departments, elf archers, mages and druid magicians who throw stones add more speculation to this game. You can upgrade towers which put you at a forefront, keeping your enemies at bay by destroying them on their paths.

You also have access to nine illustrious and renowned heroes who assist you during the quest. Upgrade them with special characteristics such as the ability to summon thunder and backup armies.

The game also has unique three dimension stunning animations and superb graphics that reveal a lot of detail. Each level reveals a detailed terrain with beautiful animations of ancient creatures scattered throughout the map with some influencing your gameplay while some producing audio effects as you hover above them. The unique path designs put the developers of the game a notch higher. 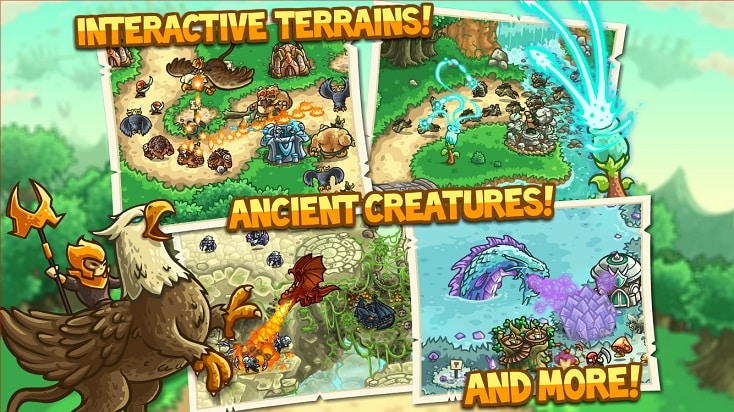 If you are a castle defense game fanatic, then Kingdom Age Origins for pc offers you the opportunity to implement your tactics throughout the prequel adventure. This game has a lot of action that has been packed making it a unique tower defense game than the rest. If you are a new player of Origins, do not shy off, although Kingdom Age lovers will have a better experience.

Kingdom Age Origins work impressively on MAC, Windows 7/8/8.1/10 and all their Pro versions. It is available on Playstore at US$2.99 and also offers in-app purchases for upgrades; it can also be played online on various online gaming websites. Minimum hardware requirements are processor speeds above 1.6GHz, 150MB free Hard disk space and DRAM of at least 1.8GB.

This is definitely an addictive game for all. So far, it has been rated very impressively by gamers around the world. Use your favorite android PC emulator to enjoy the game on your PC because it is a better experience to play it on your monitor screen, vast PC keyboard and not to mention mouse control.

This game will keep you thrilled and entertained. You will be rewarded in upgrades, coins and stars as you unlock more barracks, features and modes. You don’t want to know what awaits you up there!

How to Download and Play Kingdom Rush Origins on PC:

If you liked this post, don’t forget to rate and share. Also if you can’t run Kingdom Rush Origins on PC/MAC or any other issue, write in the comments below and we’ll help you.