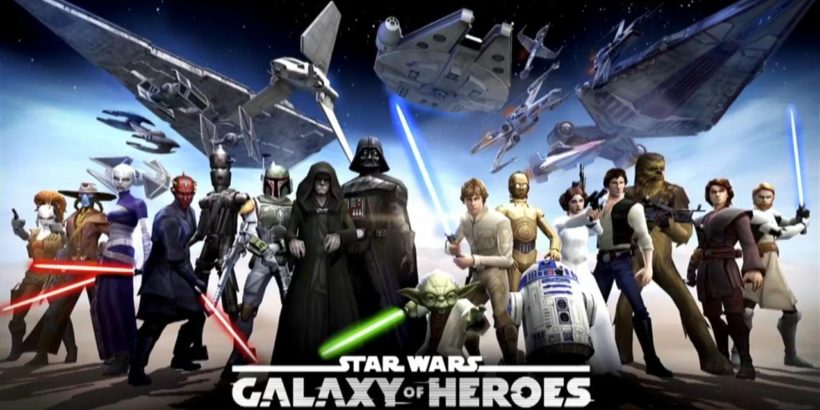 EA’s Star Wars Galaxy of Heroes is a masterpiece in turn-based strategy games for mobile devices. It is fun, moderately easy and novice-friendly. However, for more hard-core gamers, there is also a hot load of characters from the Star Wars franchise to keep you immersed deep for hours of gameplay.

EA is releasing a lot of great games lately, if you missed Minions Paradise cheats/tips article, go check it out.

Star Wars: Galaxy of Heroes is a wonderful piece of work for anyone who likes role-playing and strategy, even more so if you are a Star Wars fan.

So here are 5 essential tips that will help you play Star Wars: Galaxy of Heroes in the best possible way, and get the most out of it!

First off, unlike most turn-based combat games, Star Wars: Galaxy of Heroes is not one of those which simply make one side attack first, followed by the other side. Instead, there is a blue bar next to the green health bar in the game HUD, which fills up, indicating that it is time for your character to attack.

You can then choose between a simple basic attack or multiple abilities for each character to plan your combat moves.

Powerful abilities obviously come with a cooldown rate, which means you have to let it recharge for some time after using it once, making the gameplay more challenging.

Each character has its own role in Star Wars: Galaxy of Heroes.

Some are attackers, meant specifically for combat, some are healers, who help heal others injured in combat, some are tanks, characters with high health reserves, while some are just allies, meant to help in any way they can.

By understanding the function of each character in your team, you can plan their moves in combat, and easily win off even the toughest fights. 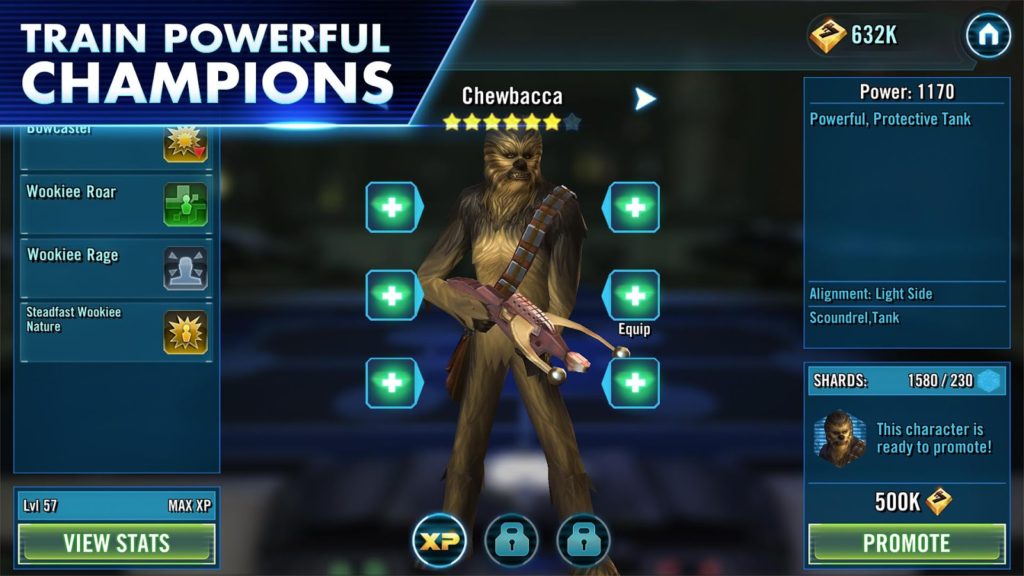 Once you have established the perfect team for battle, you need to improve on the abilities of the various characters.

The game provides many ways for you to do that. The easiest way is to make them gain more experience, causing them to level up and gain power. Further, you can improve a character’s tier rating by collecting the right amount of shards and using them to bump the character’s tier.

Levelling up and collecting materials also helps in improving abilities, yet another way to improve a character’s ranks. You can also explore the vast game world for gear and weaponry, which will improve your character’s strength in battle.

Another important gameplay factor that determines whether you win battles is whether the various powers, ranks and abilities of your different characters are compatible with each other. That is, to say, your characters need to have good chemistry and you must build your team with proper planning, with the adequate number of fighters, healers, tanks and supports.

You must combine their abilities and ranks so that they work well together and prowess in battle.

Star Wars: Galaxy of Heroes, provides you with a wide range of things to do.

There is a huge open world for you to explore, teams to build, dark-side and light-side battles to be won, supporters to be gained and experience to build up. Doing the adequate amount of exploring and venturing forth in the game for more opportunities help you emerge as a better player, with higher ranks, better team compositions and perfect synergy.

It is up to you, the player, to decide how you want your perfect team to be like, yet another marvelous feature of Star Wars: Galaxy of Heroes.

It is not often that you encounter a game with such a vast world and so many opportunities and role-playing choices to explore.

No doubt, Star Wars Galaxy of Heroes has already been compared to legendary games like Skyrim and Dragon Age, and for good reason.

The sheer number of things to do is huge, giving you hours of tireless, fun gameplay. If you want to play a game that is not only fun and engaging, but also built on something as huge as the Star Wars franchise, you should definitely check out Star Wars: Galaxy of Heroes.

About Star Wars: Galaxy of Heroes

What are your thoughts on this article? Any Star Wars: Galaxy of Heroes Cheats or tips you would like to add? Please let us know in your comments.