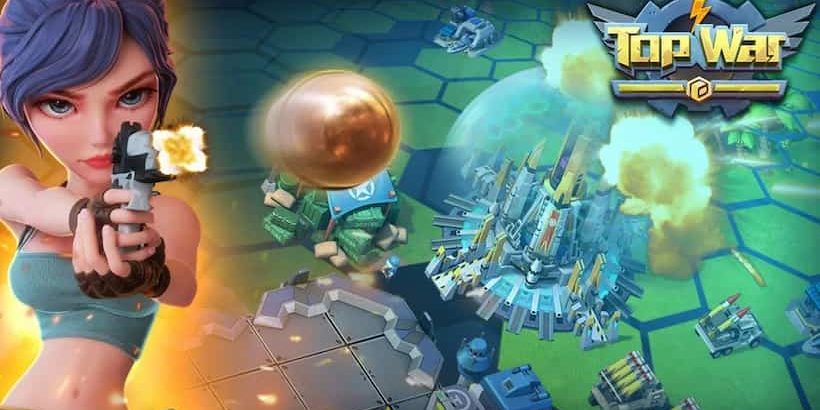 Top War: Battle Game is a strategy game where you have to join the liberty forces to fight the dark dictator. Assemble a legion of brave heroes and build a mighty military base on the island while building other strategic facilities to make your army self-sufficient and spoil the malign plans of the tyrant. You will assume the role both of military personnel and architect to bring the glory back to your evil-ravaged land.

How to Download and Play Top War: Battle Game on PC:

Download, Install, and Play Top War: Battle Game on your Windows PC or MAC with mobile app emulators for free.

Now you don’t have to wait for days and weeks to achieve an upgrade. The game uses the merge and upgrade principle where you have to merge two units or buildings to receive something larger, stronger, and more durable.

The evil powers must be defeated with fresh forces. To prevent another destructive invasion, assemble a legion of brave heroes to take a fearless stand in front of the bloodthirsty tyrant. As commander-in-chief of the liberation army, you have 3 types of troops under your control and guidance: Land, Naval, and Air Force.

Pay due attention to each of them to ensure they are equally prepared for future battles. Use the training base to upgrade the qualification of the soldiers and teach them warfare strategy.

If land fighting isn’t your thing, you can craft weapons or design revolutionary defensive structures. There is a number of classes you can choose from to bring your contribution to the development of the Liberty Army. They include Combat master, Brilliant craftsman, Great scientist, Tactical genius, and Legendary marshall.

Read more:  Pirates of the Caribbean: Tides of War for PC - Windows/MAC Download

Combine more classes to create a balance of power in your legion. Don’t forget to upgrade each hero to ensure he keeps up with the modernization of the army and with the more powerful opponents.

4. Build a training base.

The deserted island needs serious investments to restore its past glory. Start with the essential – the training base. Having a training space helps your personnel upgrade their abilities before the most important clashes and stay in shape during breaks between battles.

Once you collect more resources, you can channel them towards purchasing military vehicles, artillery, and weapons that will be stored on the training base.

5. Turn the island into a flourishing hub.

As you have the base ready, you can proceed with the further development of the island. Build strategic infrastructures, such as factories, health clinics, workshops, laboratories, stores, and other facilities to make the island self-sufficient. You can also create parks and entertainment places and decorate them in an attractive way.

As you become a reputable commander with a flourishing city and plenty of victories behind your back, you can step up your game to the next level, called Eternal Land. Here you meet the legends of the game and participate in challenging battles where you will have to push yourself to the limit to come out triumphant. The cross-server mode also allows you to make alliances with friends and new people and conquer the world together.

If you liked this post, don’t forget to rate and share. Also if you can’t run Top War: Battle Game on PC or any other issue, write in the comments below and we’ll help you.