When we look at the gaming industry today, we can see that strategy games, but also games in general, are really popular. That’s why you can find all sorts of games on Google Play Store and most likely, you will find games that suit you perfectly.

As we said, strategy games are especially popular, that’s why Last Empire War Z is one of the most played games that came out recently, at least, when it comes to this genre. But the twist is that this isn’t a standard strategy game, it also has zombies in it! You’re probably thinking that zombies are outdated and a bit cliche and don’t get me wrong, that’s true, but also, how often do you see strategy games that have a bunch of zombies them?

That’s what makes Last Empire War Z so special, the not-everyday thematic which is more fun that you could have ever imagined. When we look at Last Empire War Z as a whole, we have to admit that it’s a pretty good game, especially when we consider that you’re playing online against the real people.

Besides the whole zombie thing, the concept is basically just like every other game with one addition. Your main goal will be to train your army and build all sorts of facilities. But you will also have to fight off a massive amount of zombies which will be attacking you frequently.

Another thing you will need to keep in mind is the fact that there are different types of zombies, so that means that if you’re playing this game, boredom is not a likely option. When it comes to the graphics Last Empire War Z is pretty solid. I mean it’s not really a high-end graphics game, but you probably won’t be disappointed at all. Everything in nicely rendered and fits in the environment.

Surprising thing is that this is the first game that this particular developer has ever published and it has pretty good reviews also. The game is free on the play store, but just like most of the other free games, it offers in-app purchases.

As soon as you start the game, you will receive the assistance from a pretty good-looking girl, that will give you some few useful tips. After you have finished the tutorial, you will have to master some basic things that are simple and straightforward. In order to progress and build your empire, you will have to do all sorts of different tasks.

To make the game more interesting, developers added three different missions. Empire missions ask you to do some tasks that affect your empire, such as building objects, exploring, upgrading etc.

Daily missions don’t require you to complete anything, all you will have to do is to click on a few buttons in exchange for some resources. After you have done that, the only thing that is left for you is to wait until the mission refreshes.

Alliance missions aren’t as boring as the other two. These missions are more interesting because of the fact that you will be interacting with the real people. You will need to do that in order to make an alliance with them and defeat your opponents more easily. 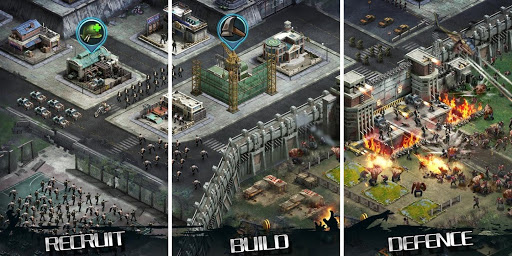 In order to play Last Empire War Z, you will need a device with iOS/MAC, Android or Windows.

How to Download and Play Last Empire War Z on PC:

If you liked this post, don’t forget to rate and share. Also if you can’t run Last Empire War Z on PC/MAC or any other issue, write in the comments below and we’ll help you.